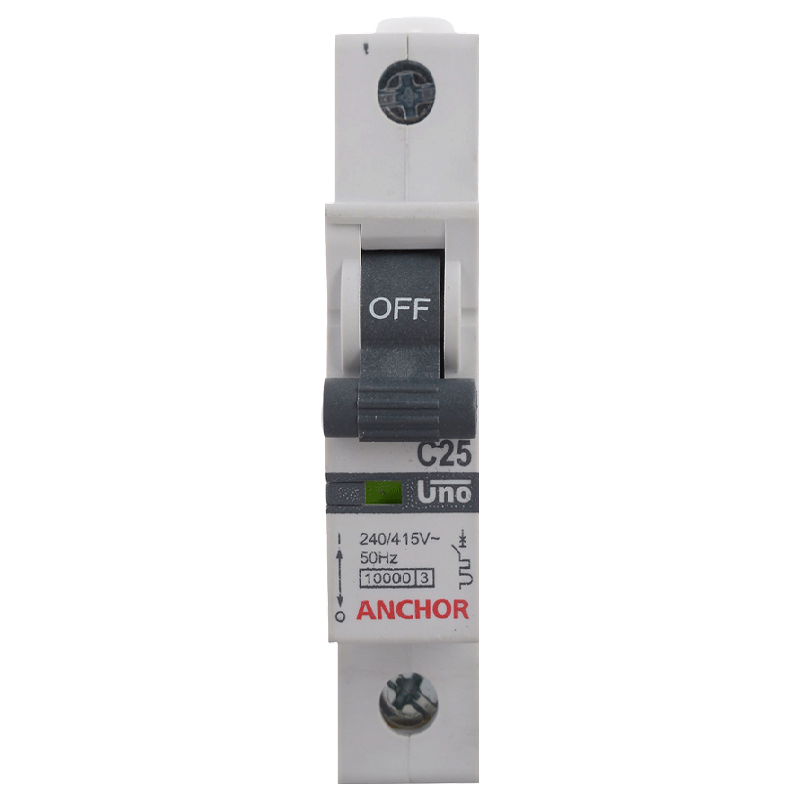 A miniature circuit breaker (MCB) automatically switches off electrical circuit during an abnormal condition of the network means in overload condition as well as faulty condition. Nowadays we use an MCB in low voltage electrical network instead of a fuse. Presenting you the Anchor UNO 25A SP ‘C’ Type MCB which offers with perfect electronic usages. It has IP 20 Degree Protection. It also has Padlocking Facility. Suitable for use in household, offices, shops, restaurants, hospitals and more.

The Anchor UNO 25A SP ‘C’ Type MCB is equipped to deliver optimum security to the electrical appliances of your home and office. secure the premises from electrical fire caused due to short circuits. Equipped with the exclusive mid-trip function makes it easy to identify circuit fault as knob stays in center in case of overload or short circuit. The high short circuit Breaking capacity of 10000A (10kA) makes it the perfect fit for your heavy electrical appliances. It comes with Breaking Capacity 10kA. It is Energy Efficient. It has a high terminal capacity of 35 sq.mm that allows using Aluminium conductors or bus- bars for connection & Bi-Connect termination that allows connection of either cable or bus - bar for better flexibility. PVC made.

The Anchor UNO 25A SP ‘C’ Type MCB has a clearly visible contact position indicator to identify the real positions of contacts inside the MCB. It is equipped with trip indication features with Mid Trip functionality. This is an inbuilt feature reflecting the difference between OFF and Trip (during a fault) of MCB. Current Limit Class-3. It is designed to allow minimum let through energy in case of faults. It operates with high-speed mechanism in which Electrodynamic forces set up by the heavy current due to short-circuit, separates the contacts several times faster before it could reach the peak value, thus suppressing the high current. When two or more poles are placed adjacent to each other.The breathing channels are so profiled that the air circulates around the individual pole, resulting in cooler operation.