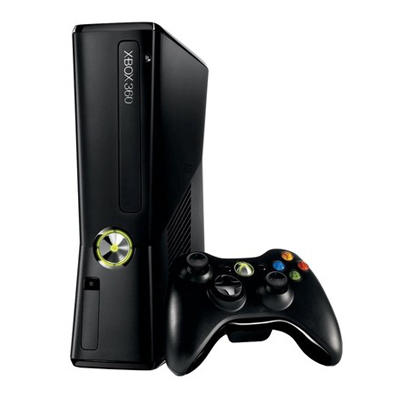 Do you already have a gaming system in place, but want more ports for storage, more audio-video options, and a better wireless controller? The Microsoft Xbox 360 Slim 4 GB is in the market and has all that you are looking for. What�s more, it is within the range of medium budget buyers and selling fast, so go get one today. And get back to games as they used to be, fun action time for both children and adults, complete with sounds and visuals. This console is Kinect Ready, i.e. ready to connect without a hitch to Microsoft�s famous Kinect sensor. Kinect Sensors pick up your physical moves, even through glass barriers, and translate them to perfectly coordinated on-screen action. Your console now allows you to send your normal moves - running, jumping, throwing - to a game, while you concentrate on winning. Hands-free gaming experience will never be the same again for you. The Xbox 360 Slim 4 GB is a takeoff on previous editions. Going beyond just a gaming accessory, it�s now a complete entertainment system, with audiovisual connectors, HDMI port, PAL and video encoding. This edition comes with built-in Wi-Fi for quick connectivity to online gaming zones like Xbox Games Store. Besides, this sleek device could just replace your old modem, as you can access the internet and connect the console to a monitor. Continue being in control of your moves and the top player even while gaming on the web with the Xbox wireless controller. Given that the Xbox 360 Slim 4 GB has a 4 GB memory space, you can store your favourite game right in it.

Xbox 360 Slim is a classy black console that doesn�t look out of place in any home. Whether it�s placed in the children�s room, bedroom, or in the living room, it manages to fit in. Its greatest advantage is the multi-connectivity option. This is a gaming console with Wi-Fi. There�s no need to connect any wire or modem, and you can put the 5 USB ports it has to other, better use. Download games from Xbox Games Store, connect with friends on social networking sites, chat with them, and get them over to play. It�s almost an online party. The Microsoft Xbox 360 Slim 4 GB Gaming Console is Kinect Ready, so connecting to a hands-free gaming experience takes a matter of moments. This Xbox console includes a soundcard with Dolby Digital 5.1 Surround Sound. Imagine a whole stadium clapping in your living room as you score in a game, virtually! The Wireless Controller connects you to friends and lets you enjoy hours of quality music or video. It can �feel� connections from 30 feet away, and runs up to 30 hours on two normal AA batteries. If you are not using Wi-Fi at home, just insert the Ethernet cable in to your Xbox and go gaming on broadband. Xbox 360 Slim is HDMI compatible, so now you can plug in all the multimedia devices you want to connect, not just a plain old TV set. In fact, even the composite 3.5 mm A/V cable is special, because you can connect to your TV set as well as extra speakers / stereo set, bringing out the full glory of Dolby Digital 5.1 Surround Sound. If you want to add speakers, go right on, there�s an optical audio-out at the side of the console.

With 5 USB ports, the Microsoft Xbox 360 4 GB Slim Gaming Console opens up a host of possibilities for you. Being slim and sleek, this black console takes up very less space. At the same time, you can download games and videos and store them on your hard disk by simply plugging it in the USB port. This console is more of a combination device than just a gaming tool. It could be the ideal hub for your multimedia devices and storage devices, along with the web, all connected together on one table-top.

The Microsoft Xbox 360 Slim 4 GB Gaming Console is specially designed for serious and passionate gamers. Enjoy hours of gaming fun with your friends and family.