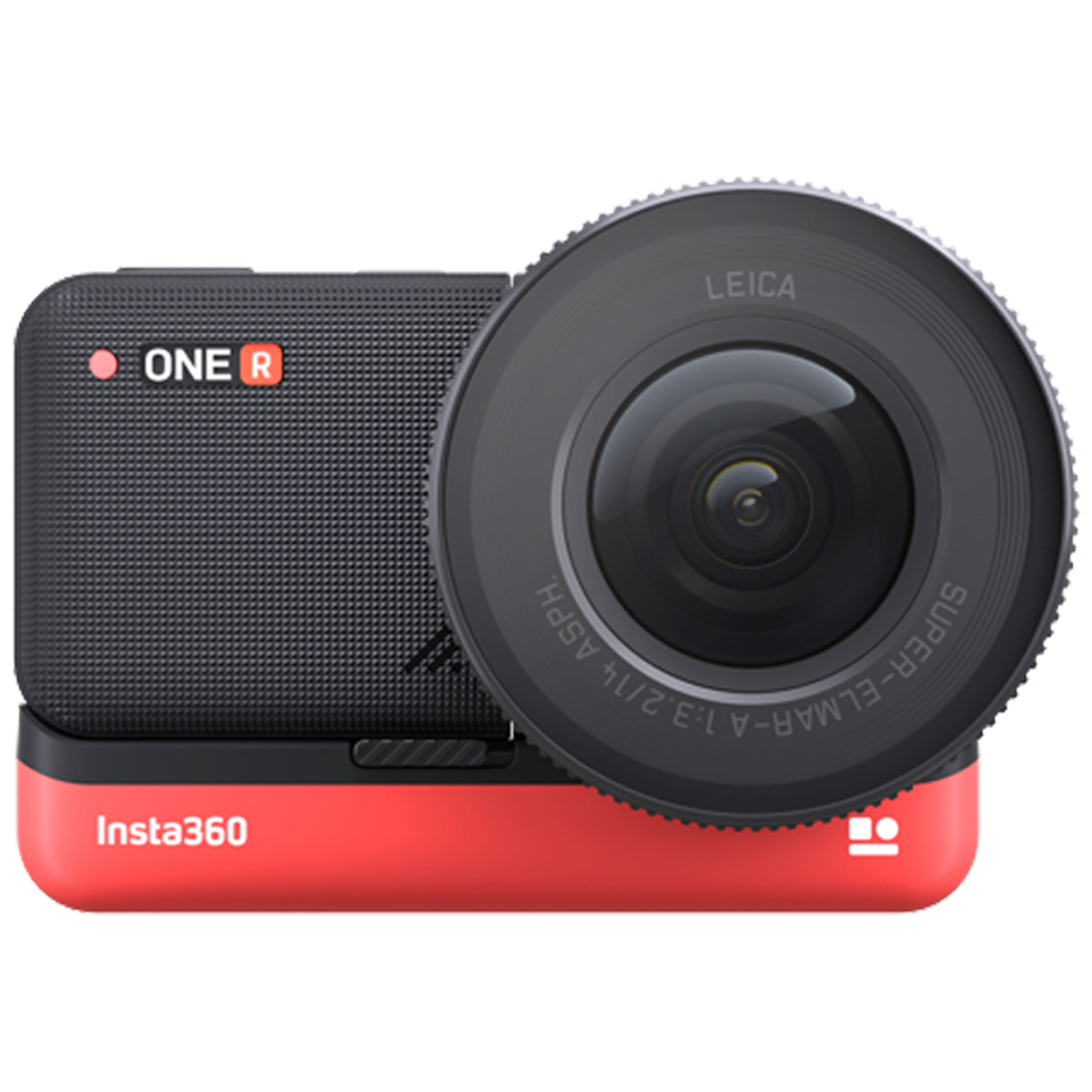 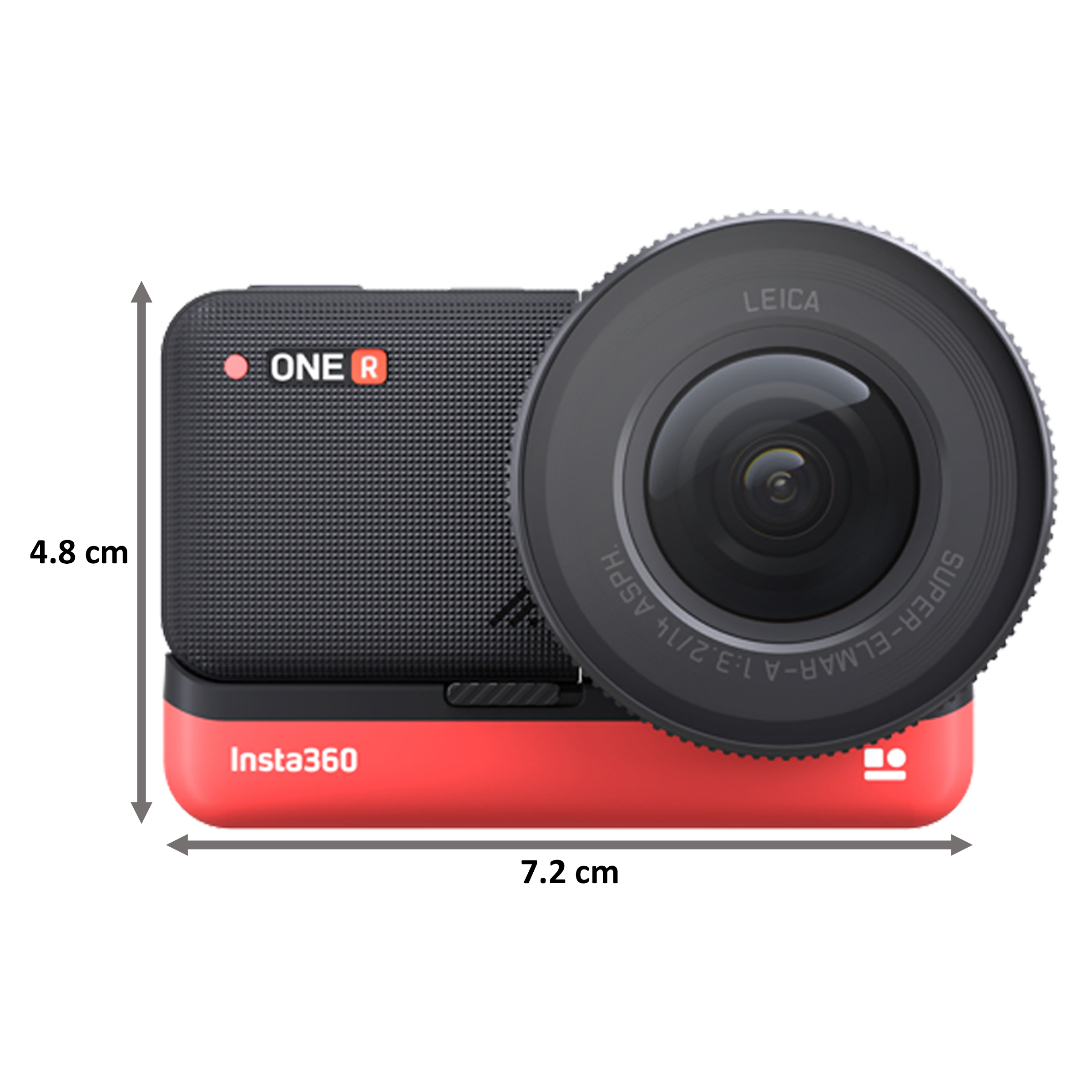 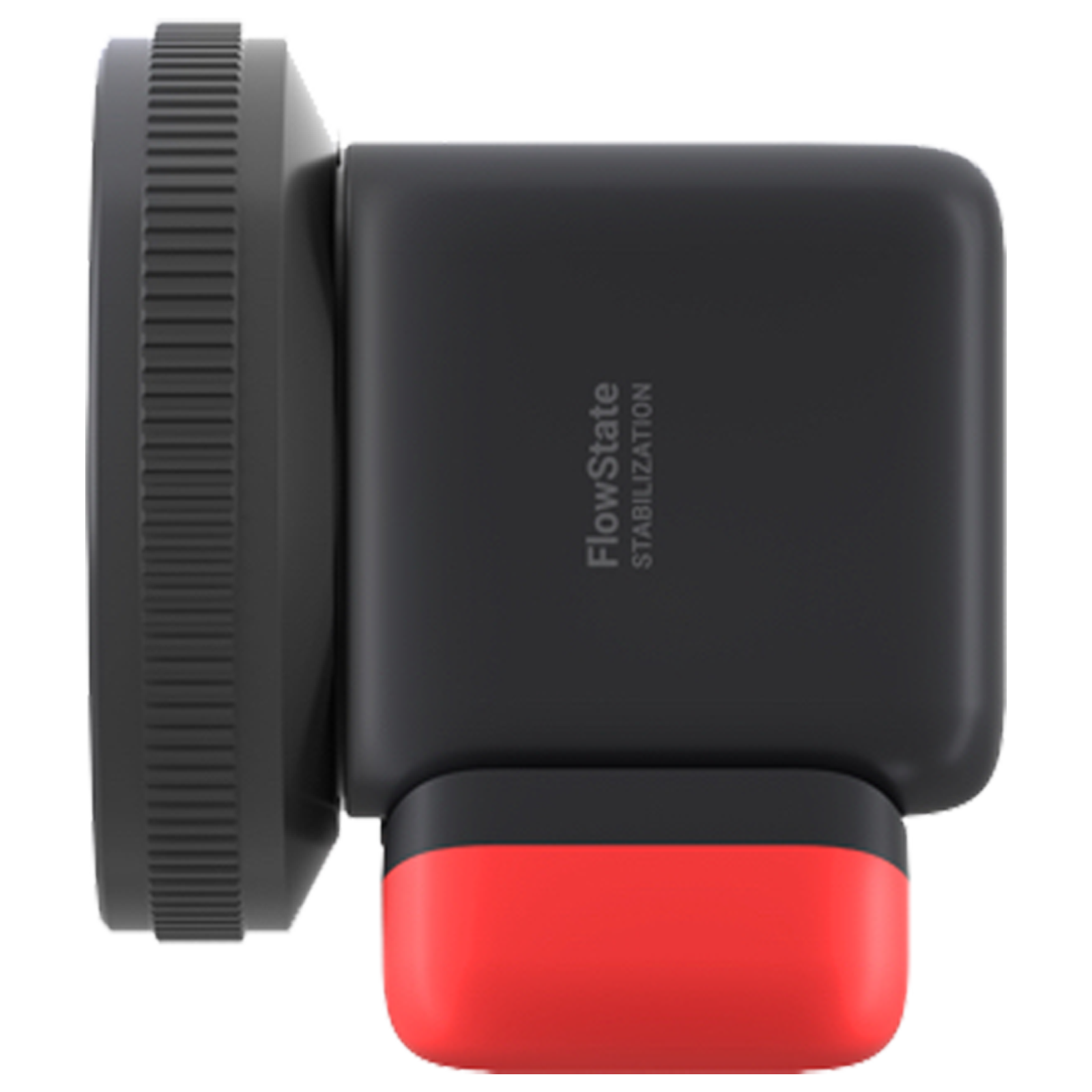 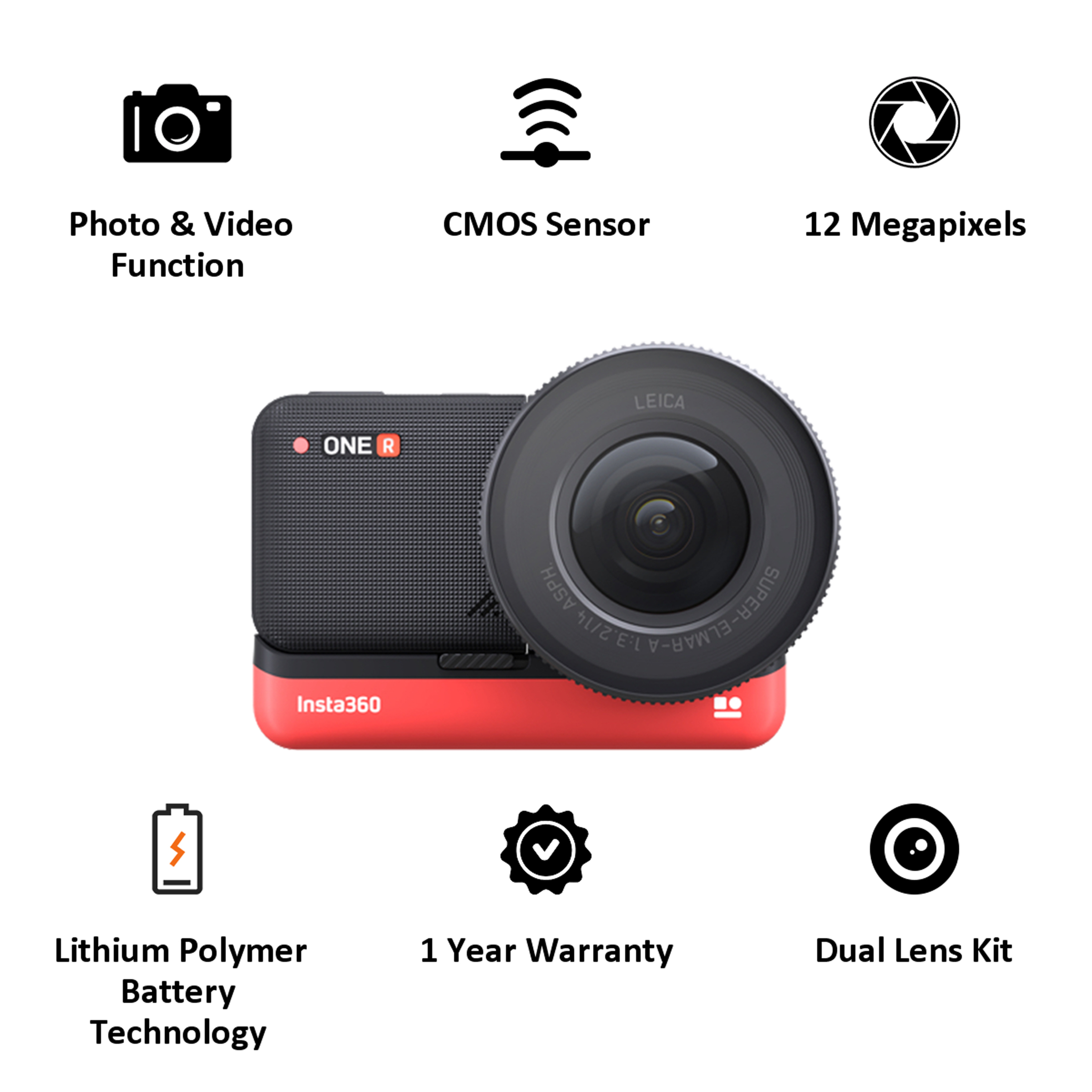 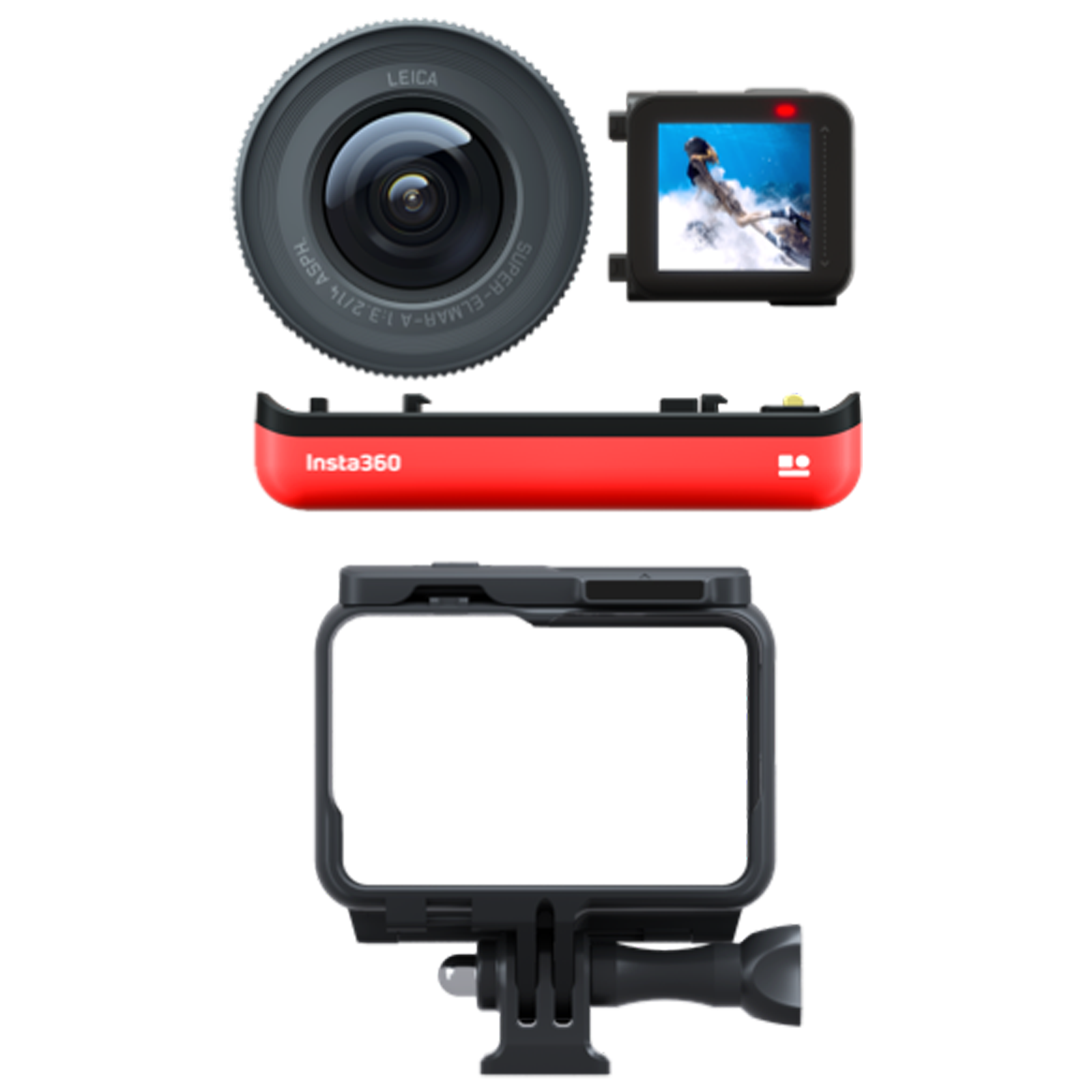 Take amazing shots while you are on the move when you buy Insta360 One R Ultimate 12MP Action Camera which is one of the key configurations of the modular One R action camera system. The Ultimate Edition includes the Core module, Large 1" Mod, Dual-Lens 360 Mod, and the necessary Battery Base that holds the modules together. The Core module, which is the brain, and any other module of your choice, mounted side by side on the Battery Base. The different modules can be swapped interchangeably next to the Core module. The Battery Base has electronic contacts that connect two modules to work together as one. Also included is a mounting frame with a standard 3-prong action cam mount. The entire setup fits into the frame in a compact form. This way it can be attached to various support accessories, including dedicated ones that were designed specifically for this One R system. All the modules, including the Battery Base, are waterproof down to 16'. Additionally, optional dive cases are available should you want to go deeper in the water. Its features like Night Mode and HDR allow you to capture video and photos in tough lighting and dark environments. The Insta360 One R Ultimate 12MP Action Camera’s price is reasonable as compared to its built quality. The Insta360 One R 1" Mod is an interchangeable module for the modular One R action camera system. The 1" Mod features a large 1" sensor and captures up to 5.3K resolution video. It's waterproof down to 16' without housing required. Additionally, for deeper waters, an optional dive case is available specifically for when using this module in your One R setup. Point to track lets you track your subject in full 360 without ever touching your camera or doing any editing. Just point your camera at your subject and say, "Mark that". The One R picks up on your voice and tracks your target. Even if the target disappears from view behind an obstacle, the ONE R resumes tracking when the subject is back in the frame. Alternatively, voice control also lets you start/stop recording and take photos.

Take your videography experience to the next level by getting the Insta360 One R Ultimate 12MP Action Camera online. Starlapse captures starlight trails across the sky in a time-lapse fashion. With the 360 Mod set up, the Core module's live screen can be swiped in all directions to see your shot from all angles and get a full 360-degree preview. Whereas many other 360 cameras only allow such a preview in a mobile app, the One R system provides it in-camera as well as in the companion app. The One R Invisible Selfie Stick from Insta360 telescopically extends from a handgrip size 6 to 27.5" in length. When used with the Insta360 One R 360 Mod, it's automatically removed from the image even when fully extended. Featuring a standard 1/4"-20 mounting screw, it also supports most other cameras similar in size to the ONE R. It's likewise removed from the image when used with the Insta360 One X, One, and Evo cameras. The One R app is provided as a free download for iOS and Android. One of its key features is a set of intuitive auto-editing functions, including 360 content. Other features of the One R include support for remote Bluetooth control from an Apple Watch or dedicated Insta360 GPS smart remote, both sold separately. The innovative, modular system also offers external mic support via an optional Insta360 USB Type-C to 3.5mm Adapter. With a single tap on the "FlashCut" button, the One R iOS/Android app analyzes your footage using AI image recognition, cuts it, and combines it into a story. From there, you can tweak the result or export it right away. The One R can detect your posture down to individual limbs and use that for editing. An example of this is the Stop-Motion feature. When this feature is selected, your body stays static while the video changes around you. So, go ahead and book the Insta360 One R Ultimate 12MP Action Camera online, right now!